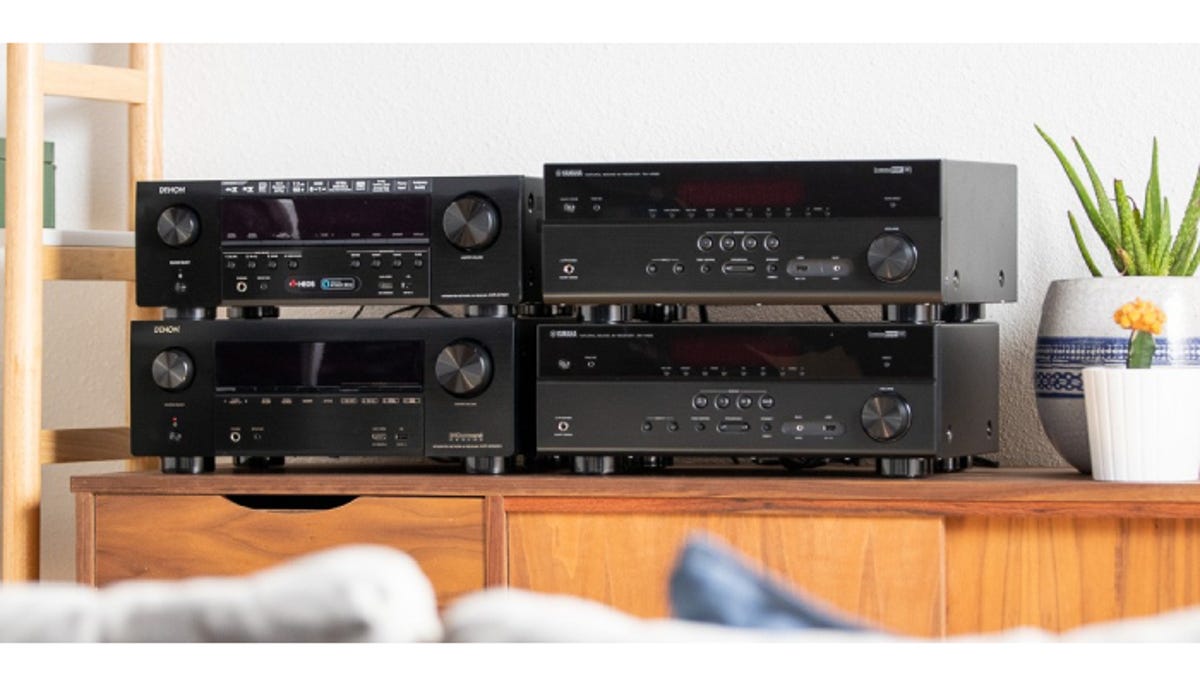 A classic piece of home entertainment that has properly shifted with the times, a stereo receiver serves to capture and amplify the signals of different audio sources. With this home audio accessory, you’re heightening the overall performance of your sound system, so you won’t have to hear scratchy radio tunes or pops emitting from your thrifted vinyl record player. However, modern receivers also do a great job of integrating today’s latest technology into its circuitry, like wireless connectivity for today’s smart devices. Of course, golden oldie features like AM/FM radio remain, and that’s what keeps this decade-jumping audio component so in demand. If you’re in the market to raise the volume, here are some stereo receivers that we recommend.

Choosing the Right Receiver for your Home

Before you buy, consider these factors: 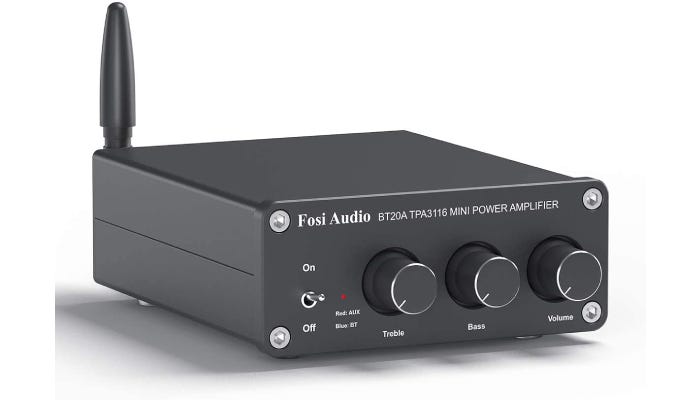 While compact in size, Fosi Audio’s Bluetooth Stereo Receiver packs a wallop of powerful amplifying power. This is a Hi-Fi wireless amplifier specifically designed for users who expect the best out of their sound systems with little fuss. It features a CSR Bluetooth 5.0 core with the ability to transmit quality sound by up to 50 feet. Another notable feature in pursuit of superior sound quality is its Texas Instruments TPA3116D2 Chip, which reduces harmonic distortion to staggering lows. It also helps that this receiver just looks good. It isn’t too large, and its face isn’t overcrowded with buttons, which makes navigating it all the more simple.

This stereo receiver makes the most out of its compact design. 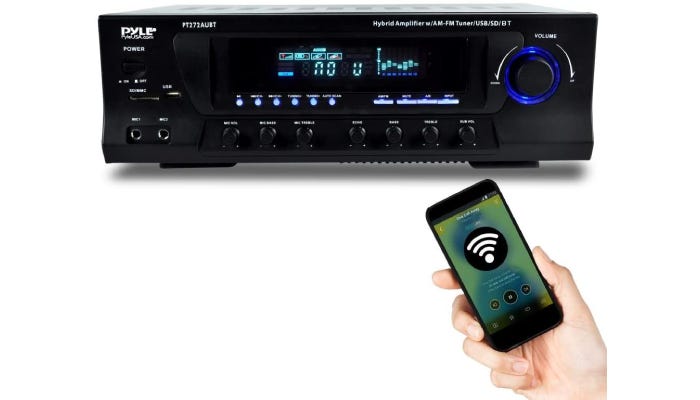 From its AM/FM Radio and easy-to-read LCD display to its Bluetooth connection and USB Flash and SD Memory Card Readers, the Pyle Wireless Audio Amplifier offers some of the most extensive features you could want out of a receiver while still being far from overwhelming. Among those features are a pair of microphone inputs, 50 memory presets for the radio, and a series of volume adjustments for the echo, bass, treble, sub, and mic volume. With this receiver, you can also expect a maximum power output of 300 watts to go along with its wireless music streaming across iPhones, Androids, tablets, and other smart devices.

This stereo receiver brings a lot to the table without bombarding the user. 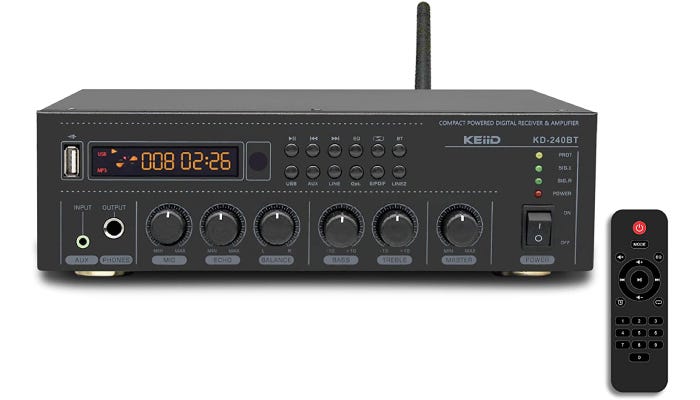 Nowadays, you’d be hard-pressed to find a stereo receiver that doesn’t offer Bluetooth connectivity; however, if you’re in the market for one that does it the best, the KEiiD Digital Amplifier has to be your go-to. This receiver features the latest and greatest Bluetooth 5.0 technology, which means you’re getting a more stable connection and seamless transmission of sound; whether you’re relaying sound from a smartphone, laptop, or vinyl record player, this receiver is optimized to deliver clear sound quality through any home audio device by up to 65 feet. Users can take comfort in knowing that this receiver also features a five-level protection system (overload protection, over-voltage protection, over-current protection, short protection, self-protection) to bring you great sound as safely as possible. 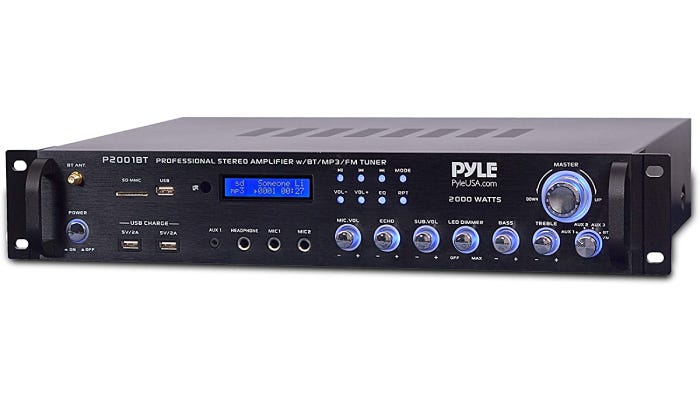 Of course, the best stereo receivers should be able to provide ample power to deliver great sound quality; Pyle’s Multi-Channel Bluetooth Receiver, however, goes above and beyond the minimum power you need. Reaching as high as a 2,000-watt output, this stereo receiver is a truly high-powered product. With that amount of peak power, you can expect near-flawless performance out of your home audio system. That power is also regulated and protected by an internal cooling fan, which expels warm air from the inside of the receiver. Like other models, it’s integrated with Bluetooth technology, so you can quickly pair and wirelessly stream music from any of today’s latest devices.

The usual features here are backed by a seriously high-powered performance.

One of the most enjoyable, immersive parts of seeing a movie in theaters is the sound coming in from every angle, not just directly from the screen. If you want to bring this sensation into your home theater for a true movie theater-like experience, a surround sound stereo receiver like this model from Sony can help bring this effective into your living or TV room. Unlike some other surround sound speakers, this one isn’t big and bulky. You get movie theater-like sound in your home, thanks to the S Force Pro, with only a two speaker setup, so it won’t take up extra room in your living space. Not only is this stereo receiver nice and compact but it’s multifunctional as well. It can connect to your phone via Bluetooth in order to stream music, as well as offering a multichannel stereo setup and FM radio tuner. There’s also a jack to plug in your headphones if desired. Besides the speaker itself, you’ll receive a carrying case, charging cable, audio cable, and foldable headphones.

A compact stereo receiver that provides surround sound without taking up extra space. 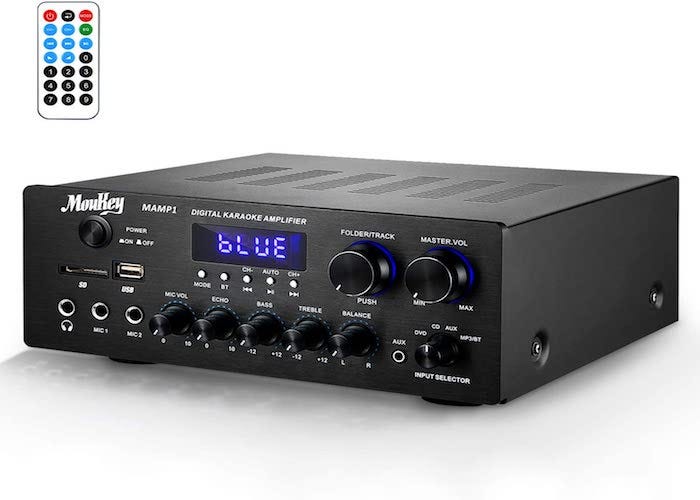 There’s plenty to love about this Moukey Bluetooth stereo receiver. It can be used not just for your home theater but for karaoke, an acoustic sound system, or even a personal music playing device when headphones are plugged in. The digital amplifier box allows it to support multiple external signal sources, and it can connect to Bluetooth 5.0 from at least 40 feet away. The Bluetooth connection is compatible with smartphones, computers, iPads, and the like. So no matter which device you prefer to use to stream your music, you should have no issues synching it up with this speaker. The LED front display is incredibly easy to read for your convenience, and the knobs and buttons that control the volume, bass, and other functions are designed to be responsible to your touch. This stereo receiver also comes with remote control if you prefer that instead, as well as an FM antenna for distant audio adjustments.

An easy to control stereo receiver that will sync with any of your modern devices. 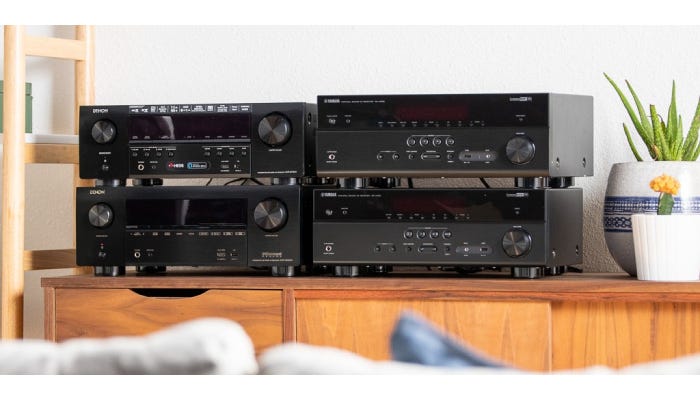