When the lightning storms and heavy rains roll in, or when your curious kiddo gets too comfortable around the outlet in their bedroom, a surge protector is exactly what you need to prevent your electronics from getting zapped.

Every surge protector is a power strip, but not all power strips are surge protectors. What divides the two is an internal circuit breaker that gets tripped when too high of a voltage spike attempts to fry your outlet. That’s what makes a surge protector special, so if you’re in the market for a bit more protection, then here are a few options we think you should check out.

Why should you buy a surge protector?

The surge protector is well regarded because it’s capable of stopping a dangerous overload, short-circuit, voltage, or power fluctuation in its tracks before reaching and destroying your plugged-in devices. Of course, they’re also a great means of creating new charging space, multiplying the standard setup of a single home or office outlet by as much as five to six times.

What should you look for in a surge protector?

Consider these factors when you’re in need of an extra level of safety:

When should a surge protector be replaced?

Eventually, your surge protector is going to bite the dust, and you need to be prepared to make a switch for your devices. But when exactly should that happen? For starters, if your protector has experienced a surge or shortage, then replace it immediately. You’ll typically know your surge protector has taken on too strong of a spike when the indicator light is blinking red and “Not Supported.” However, this isn’t always foolproof, and because a protector’s lifespan is measured in joules rather than years, the timeline can get hazy. If you were to roughly translate this into years, the best method for ensuring the safety of your devices is to replace the protector anywhere between 3-5 years.

Our Picks for the Best Surge Protectors

Pros: With its wide selection of outlets and built-in safety considerations, this surge protector makes a multifaceted case for our top pick. It includes 12 traditional outlets that can support small and heavy-duty devices in a 1,875-watt/15-amp range. At the base of the protector are four USB ports that promise a fast recharge for the likes of your phones, speakers, and gaming devices. This protector features safety shutters to prevent any accidental or curious misuse of its 16 sockets. Its encasing is fire-retardant up to 1,382 degrees Fahrenheit and pairs well with internal shutters to keep temperatures low.

Cons: This surge protector’s 6-foot extension cord places you in a bit of a tough spot, as it grants you just enough space to work comfortably but not enough to work over large distances with multiple people. The dimensions of its encasing (11.6 by 4.1 by 1.2 inches) can also make the protector hard to pack away for work on the go. Additional concerns can be aimed at the product’s standard plug-in design that juts out of place and can be struck as a result.

Bottom Line: If you’re seeking industrial strength in a home-friendly package, this Witeem Surge Protector features a bevy of charging perks that will keep you and your devices safe.

Pros: Simple and fuss-free for home office or college dorm needs, this surge protector wisely avoids the excessive add-on’s that can bog down similar devices. It features a manageable five-outlet setup alongside three USB ports at the base of its rectangular frame. There are two mounting holes located behind the protector that allows you to conveniently position it away from the ground where damage is most likely. It’s also available in eight color options and three different sizes, ranging from 4-16 feet long.

Cons: Because this is a smaller surge protector, you’re going to be placing fewer electronic devices at risk. However, the downside to smaller protectors is a lessened maximum joule rating, and this option’s 900 rating definitely lacks the power that larger options surpass while asking for just a few extra dollars. The included fastening cable is great for transporting your protector, but this type of Velcro strap is known to attract lint and debris easily if you keep it too close to the floor.

Bottom Line: If you’re in the market for a protector that can refuel a moderate amount of electronics without costing much more than pocket change, this SUPERDANNY Surge Protector provides ample charging strength in a variety of classic colors.

This surge protector allows you to avoid cord messes and potential damage.

Pros: For users seeking a compact alternative, this option takes up minimal space while delivering a speedy charge. It features three standard outlets placed across its front panel and two USB ports positioned on the right side. This protector rests on a 360-degree rotating AC plug that can be plugged into most wall sockets and swivel in your preferred direction. Its wall-mountable design is formatted to save you space and promote on-the-go usage, so you can use it wherever you need.

Cons: While its compact design is serviceable for portable work and emergency situations, you need to accept that you won’t get the same amount of charging space out of this one (three standard outlets) when compared to most protectors (six standard outlets). Some users have also noted that while the swivel neck sets it apart, its protruding style can lead to sagging when more than one outlet is occupied, no matter which direction it faces.

Bottom Line: If you’re looking for a sturdy means of electronic refueling that doesn’t need to take up 6 feet of floor space, this Belkin Wall Mount Surge Protector is mini in design but a dependable behemoth in regard to its power and uniqueness.

This surge protector measures 48 inches across and features a total of 16 outlets to its frame.

Pros: This surge protector offers some of the best charging space across its extended frame. It features a 16-outlet setup with 2.8 inches between each outlet, so you can charge small and large devices alike. The frame itself is constructed from heavy-duty aluminum housing in addition to plastic panels that ensure a shock- and heat-resistant product inside and outside. On top of the extended frame, this surge protector also features a 15-foot cord for maximum extension.

Cons: Though it sports an unmatched length, that can also be a downside for some users. Its 48-inch frame is daunting for those who don’t have a considerable amount of wall space to set aside. And on that note, if you aren’t prepared to mount this option into your wall with the included screws, you’ll have to get crafty to prevent drilling into the drywall. Given its size and amount of outlets, this is also one of the most expensive surge protectors on the market.

Bottom Line: If you’re looking to spend top-dollar for assured charging in abundance, this CRST Heavy-Duty Surge Protector is, like its name suggests, a massively rugged and accommodating option that will fit right at home in classrooms and office settings.

This surge protector features rotating charging slots and one of the best maximum joule ratings on the market.

Pros: Innovative in nearly every way you can spin it, this surge protector provides you with plenty of room to charge alongside a can’t-miss energy rating. This option features an above-average setup of eight standard charging outlets in a tower style with pivot slots, allowing you to rotate any of the eight outlets back and forth to charge accordingly. The real treat here is its staggering 2,160-joule energy rating, surpassing protectors by several hundred joules. This option can also handle a spike surge up to 6,000 volts.

Cons: This is another protector with a slightly hefty price tag, so you’ll need to be comfortable handing over a bit more cash upfront to enjoy its multifaceted safety. For all of its modern advancements, this choice still utilizes a traditional plug-in head rather than a flat head, so it’s a lot more likely to take on damage around kids and furniture. The pivoting design of its outlets doesn’t feature a locking mechanism, so you may experience unintentional shifting while using plugged-in devices.

Bottom Line: If you’re after a surge protector that can just about do it all while looking unlike any other, this Belkin Power Strip Surge Protector is formidably tough and well designed.

Whether you need it to handle a heap of electronics or just to ensure the safety of a few, the surge protector can provide you with maximized charging space that combines what you love about extension cords with desirable safeguarding. 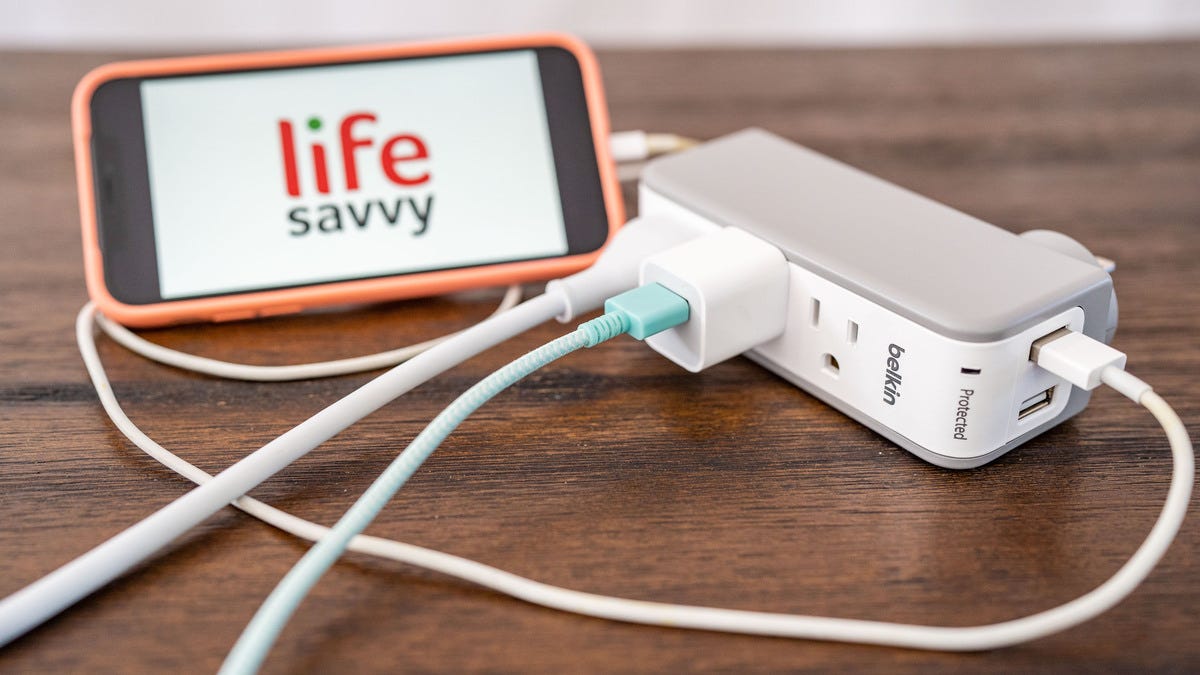 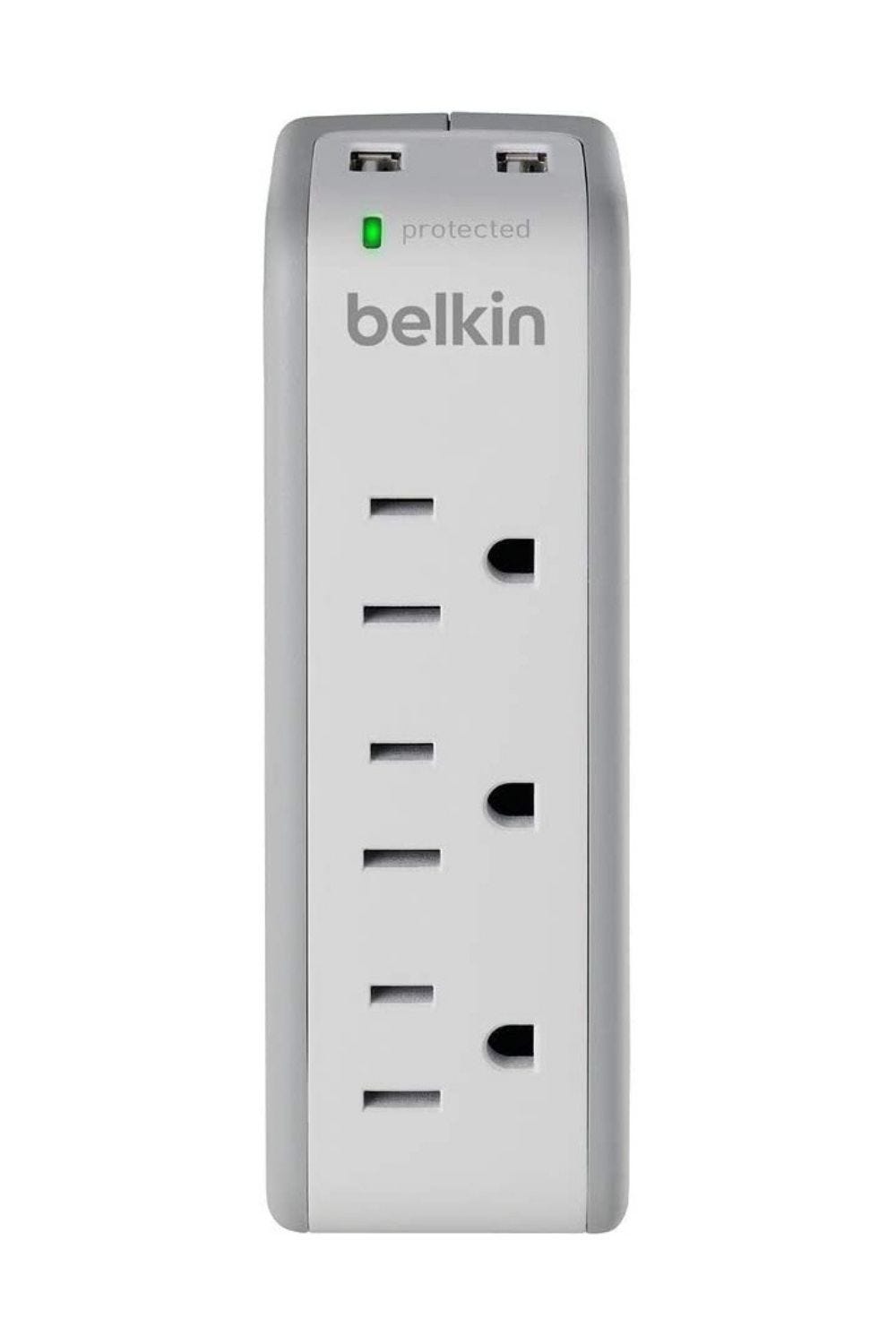