Mouthpieces are a small but key part of all brass instruments, tubas included. Even the most experienced musicians need the right tuba mouthpiece to draw the best possible sound and music from their instrument. Here are a few we recommend.

Why buy a tuba mouthpiece?

Tubas are the largest member of the brass instrument class. They’re known for their low, deep sounds more so than trumpets, trombones, or any other instrument in the brass family. If you play or own a tuba at all, even just casually, investing in your own tuba mouthpiece is always a wise choice. No sound is coming out of your tuba if you don’t have a mouthpiece attached to the end, making it an invaluable part of the instrument. Beyond this admittedly key factor, the mouthpiece affects not only the sound and volume your tuba makes, but how easy or difficult it is to draw sounds from it. Thus a novice tuba player and a seasoned professional are going to have different needs from their tuba mouthpiece. Varying sizes and shapes of mouthpieces can make a tuba’s notes higher and brighter or deeper and lower, depending on what you’re after.

Even if your tuba already has a suitable mouthpiece, it’s worth your while to have at least one spare replacement on hand should you lose or break your current one. Alternatively, if you’re just starting to learn the tuba, you may want to have more advanced mouthpieces ready to switch out with your beginner-friendly one, once your skill level has increased. Some musicians also like to have several mouthpieces with different tones for different musical pieces or like to experiment until they figure out which mouthpiece they like best.

What should you look for in tuba mouthpieces?

Are there other factors worth considering in a tuba mouthpiece?

Don’t forget to consider a tuba mouthpiece’s throat and backbore when you’re making your choice. The “throat” is the top half of the neck (called the “shank”), around where it meets the cup, and the “backbore” is the lower half, where the neck attaches to the instrument. The throat and backbore size affect the sound in a manner very similar to the cup size. Wider throats and backbores mean bigger, deeper music and require less pressure on your end to play, while smaller throats and backbores require more effort but are the better choice for higher, brighter pitches. As with cup and rim size, it all comes down to personal preferences and your experience levels, and it may take a bit of experimenting to find the right one for you.

Our Picks for the Best Tuba Mouthpieces

Available in three different sizes, this tuba mouthpiece is well-suited for pretty much any player regardless of their experience level.

Pros: If you’re not sure where to start looking for a tuba mouthpiece, you can’t go wrong with this model. Durable, strong, and silver-plated, this mouthpiece is resistant to acid and alkali alike. It’s easy to draw rich, classic tuba tones from, even if you’re brand new to playing the tuba. Yet even more experienced players can benefit and enjoy this mouthpiece and its professional-feeling design, especially since it’s quite the bargain compared to a lot of replacement mouthpieces. You also get a complimentary storage box included with your purchase, providing even greater bang for your buck. There are three different styles available to choose from, so you have some variety to choose from.

Cons: It’ll serve its task admirably, yet some more experienced players may find it a bit too basic for their liking. You won’t be able to draw extra-high or extra-low notes with this mouthpiece.

Bottom Line: Finding the right tuba mouthpiece can be a bit tricky, especially if you’re just learning how to play. Fortunately, this is tuba mouthpiece is pretty much impossible to go wrong with, no matter what experience level you’ve reached.

If you want a mouthpiece that helps to create deeper, lower, and darker tones, this is the model for you.

Pros: If you’re after a tuba mouthpiece with a wider and deeper cup, you can’t go wrong with this model. Its size and shape are perfectly designed for drawing out the deeper and lower sounds that tubas are so well known for, and it’s fairly beginner-friendly. Though not as easy to draw notes from as a smaller, shallower cup, it also won’t fatigue novice players too much. This mouthpiece is also made from good quality brass with real silver plating, so you won’t have to worry about the brass touching your skin if you’re sensitive or mildly allergic to it.

Cons: This is a BBb tubas mouthpiece, so it’s really best suited for BBs and Bb tubas; tenor-style tubas. It may be able to fit or pair with other types of tubas, but not as well. It also may not sound as good if it’s attached to a non-tenor tuba.

Bottom Line: Tubas are naturally deeper-sounding instruments, even by larger brass instruments standards. If you want to draw the darker, deeper, lower possible sounds from your tuba, the wide, deep, cup of this mouthpiece is a perfect choice, especially if you own a tenor tuba.

Tubas are known for their deeper sounds, but this smaller-sized mouthpiece will help you coax lighter, brighter tones from your instrument.

Pros: If you’re after a smaller and shallower cupped mouthpiece for your tuba, this high-quality piece is one of the best possible options for your instrument. Its more diminutive size can create higher, lighter, and brighter sounds than the average tuba mouthpiece can, and it’s easy to play as well. Even beginners with minimal experience shouldn’t have much issue drawing sounds from it while playing. The make is high-quality brass with silver plating for protection, which helps produce richer, purer notes. And, as a bonus, it’ll fit standard-sized sousaphones as well as tubas.

Cons: This mouthpiece is on the expensive side, as is to be expected of a model made from such high-quality materials. And, unlike a lot of more premium, pricey tuba mouthpieces, it doesn’t come with its own cleaning brush or storage pouch or box.

Bottom Line: Tubas are the deepest-sounding instrument in the brass family, so it can be trickier to hit those higher notes while playing it. But with the smaller, shallower cup of this mouthpiece, you’ll be able to draw lighter, brighter sounds from your tuba without over-fatiguing your mouth.

You want the best for your instruments, and this tuba mouthpieces with its loud, organ-like tones is a premium, quality choice.

Pros: If you want only the best accessories for your instrument, you can’t go wrong with this premium-level tuba mouthpiece from a trusted, well-known brand. It’s made out of pure brass with silver plating to protect against people sensitive or allergic to brass, both of the highest possible quality. The cup and overall size of the mouthpiece are on the medium side, producing an organ-like sound that’s nice and loud, and not super hard to play. It’s suitable for most players of all experience levels and offers superior control over the musician’s dynamic range. A cleaning brush also comes included with your purchase.

Cons: As is common with premium products made from high-quality materials, this tuba mouthpiece comes with a premium price tag. And unlike most top-of-the-line models, it doesn’t come with a protective storage box or pouch.

Bottom Line: This is another top-notch, standard tuba mouthpiece that will be suitable for players of most levels, novice or experienced. Its medium size is easy to draw noise from, while the premium quality of the brass ensures that those notes are as loud as possible.

If you want a mouthpiece that'll match your brass tuba or the more flexible feel of gold plating, this will be the model for you.

Pros: Silver-colored and silver-plated tuba mouthpieces are widely available and easy to find, but their color won’t blend seamlessly with the brass hues of tubas. This model is made of real brass, and it has a golden-colored plating to better match. And since it’s not real gold, it doesn’t have the higher price tag that comes with true gold. It’s a highly affordable model that comes with its own storage box plus a vacuum-sealed bag for both storage and protection when not in use. It offers a good range of tones, low, mid, and high alike, and there is a silver plated option available if you prefer.

Cons: As is sometimes the case with lower-priced tuba mouthpieces, the tone and feel of this model may not be as strong or feel slightly off at times. It will get the job done, but it isn’t the highest possible quality mouthpiece on the market.

Bottom Line: Gold-plated tuba mouthpieces will better match and blend with the natural brass color of tubas, but they’re much more expensive to buy. The plating of this mouthpiece gives you that same golden hue without the price tag that comes with real gold. 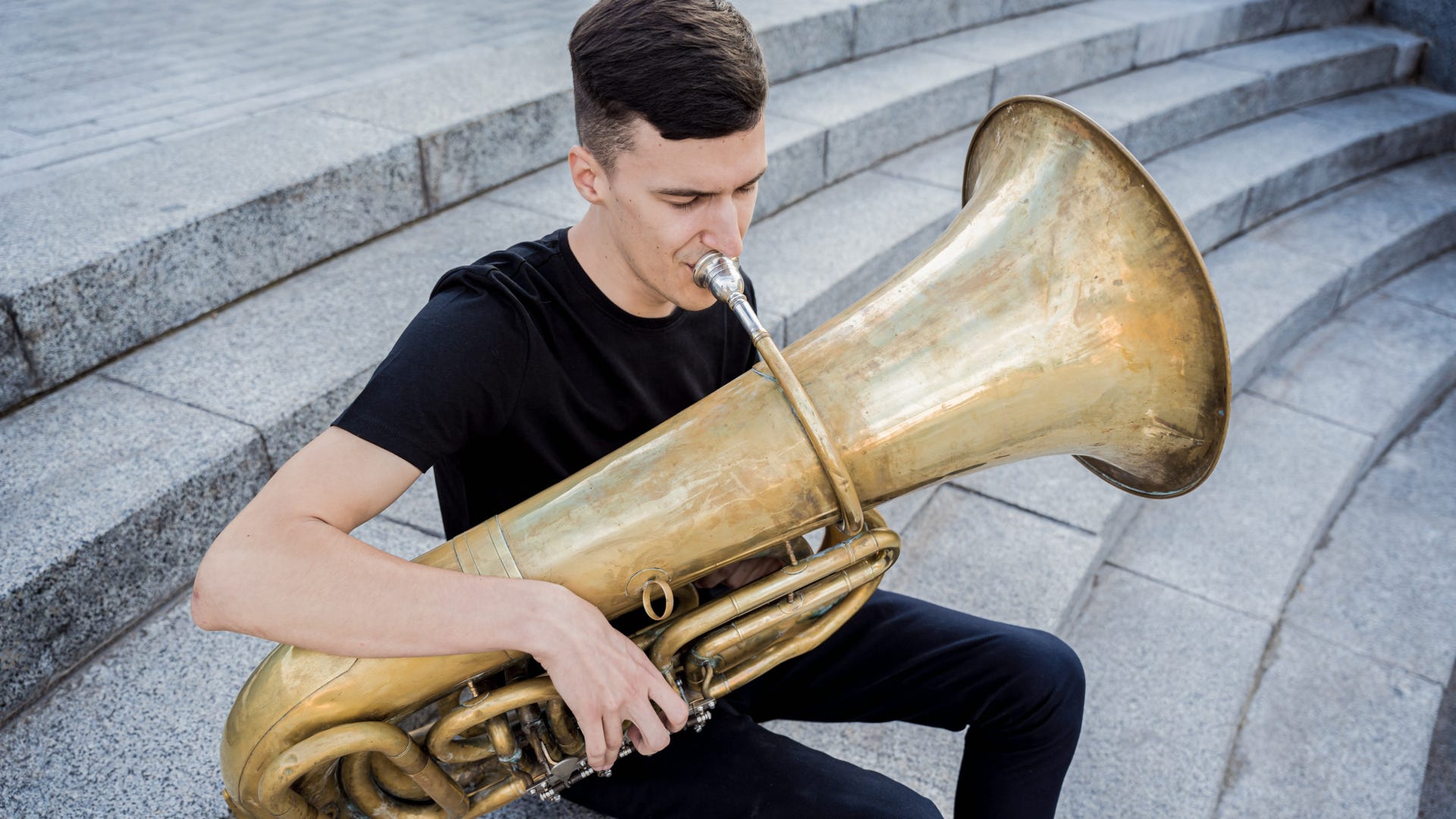 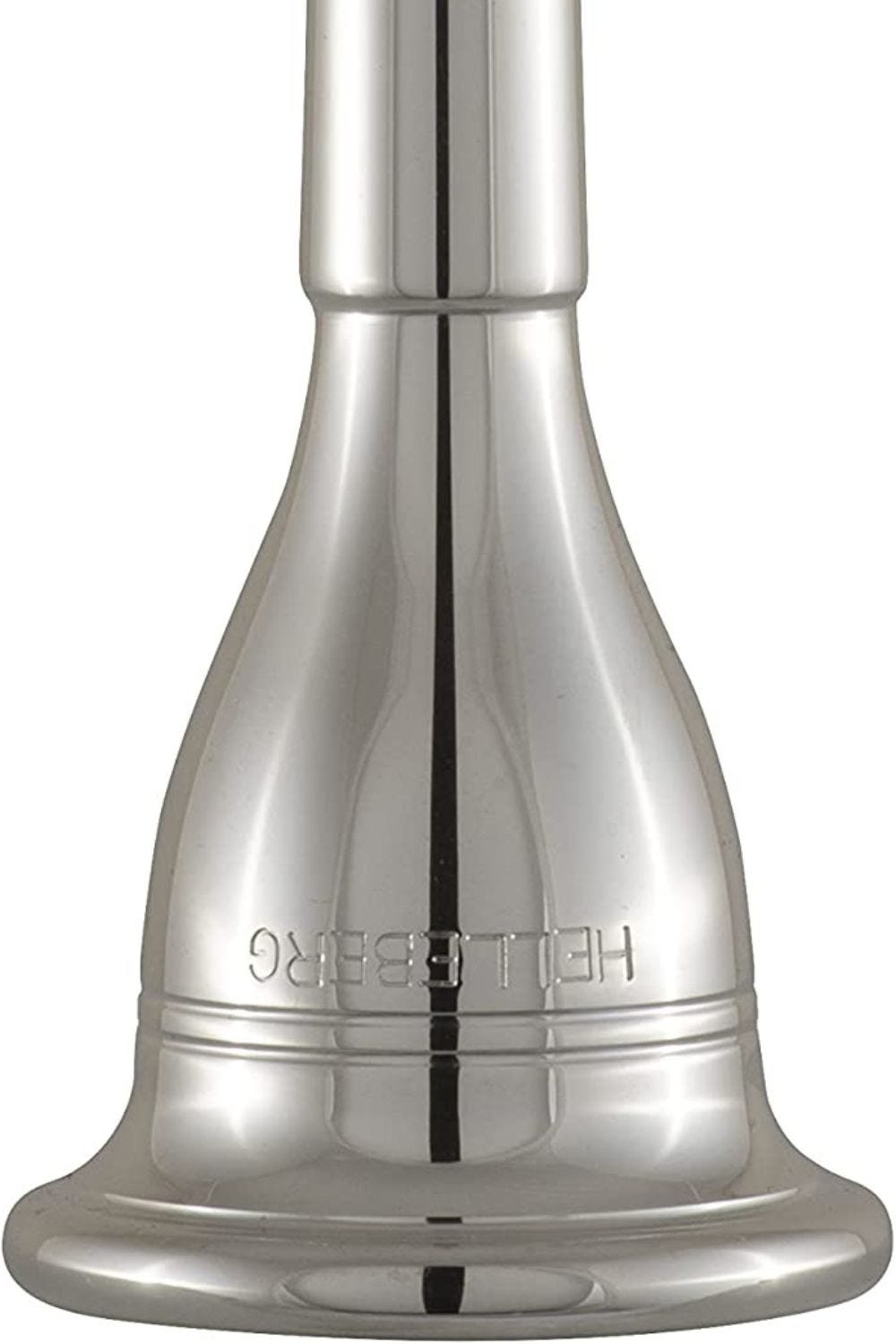