The Best Waxes for Your Snowboard

Waxing your snowboard on a regular basis is key to a smooth ride. Different types of snowboard wax can make for a more enjoyable and customizable snowboarding experience. Here are some we recommend.

The Best Waxes for Your Snowboard

If you own your own snowboard, buying snowboard wax for it is a must, especially if you snowboard with any sort of regularity. Waxing your snowboard ensures both the board and the snow are slippery and decreases the board’s drag to give you a smoother and speedier ride. It makes it easier to execute certain types of turns. Even beginners can benefit from waxing their snowboard for this reason. Snowboard wax also helps prevent scratches and seals the board’s base to keep it from drying out and delaminating, so it’ll last you longer. The type of snow on a slope can change from day to day, but you can’t change your snowboard type or material. The right wax can alter your snowboard to be more suitable for powder, ice, or extra-dry or extra-wet conditions.

What should you look for in snowboard wax?

How often should you wax your snowboard?

The good news is that you won’t have to wax your snowboard each time you take it out for a run on the slopes. Generally, the rule of thumb is that you should wax it at the very beginning and end of the snowboarding season and every three to five days after a ride. You may want to up that to every two to three days if you’re a really frequent rider who spends hours and hours on the slopes each time you go snowboarding. If the snow where you board is rough or slushy, you’ll probably have to wax more frequently, too, to reduce the risk of wear and tear.

If you’re ever unsure of whether or not your snowboard needs waxing, take a look at the bottom. Snowboard wax dries clear, so if the bottom of your board is starting to turn dry and white, that means it’s time for a fresh coat of wax. If you’ve noticed your board is starting to drag or slow down, especially in flat areas, that probably means it’s in need of waxing, too.

Our Picks for the Best Snowboard Waxes

A universal-temperature wax that comes in a large block for high quantity and value.

Pros: This block of wax weighs in at just over a full pound, providing you with a nice high quantity that will keep even the most frequent snowboarders supplied for a while. Not only is this wax a premium blend with a pleasing scent, but its high-quality make also helps your board achieve greater speeds. As a bonus, it’s blended to function in any and all snow temperatures, so no matter how cold or warm the day might be, you don’t have to worry about the wax being compatible with the conditions. The price is quite reasonable given its quantity and quality too.

Cons: This wax is prone to melting pretty quickly during the application process, so you may have a bit of a tricky (and messy) time while you’re actually applying it to your snowboard.

Bottom Line: If you’re a regular snowboarder, you may find yourself having to wax your board quite often. This means that you tend to go through wax very quickly and have to buy it frequently. If you’ve found yourself in this predicament before, this snowboard wax may offer a solution to your problem.

A fully equipped snowboard waxing kit that comes with a pound of wax and all the tools you'll need to apply it.

Pros: This kit has everything you need to properly wax your snowboard and then some. The wax itself can be applied with its included heat-adjustable wax iron. Besides the 1-pound block of wax and the wax iron, this kit includes a multi-angle tuner and the snowboard tuning essentials: a tuning stone, two files, a metal scraper, four different brushes, a polishing cloth, citrus-scented base cleaner, and two P-Tex rods. The edge tuner can be used at an 88-to-90-degree angle for better sharpening precision. A guide with instructions and a carrying bag that fits all the tools are also included for your convenience.

Cons: This kit is a lot more expensive than just buying wax by itself, even if you do get a lot of useful tools for your money. And there’s no option to purchase just the wax separately from the kit itself, so you may have to do some digging if you like the particular wax that comes in the kit.

Bottom Line: If you’re a serious snowboarder or simply someone who wants to start taking better care of your board, you may want to consider investing in a waxing kit such as this one. Beginners can still benefit from it, too, especially if they don’t know where to begin or need some extra guidance.

A rub-on wax that doesn't require any extra tools and can be applied with minimal steps.

Pros: Don’t have an iron to apply your wax or want an easier way to re-apply it to your board? Unlike many snowboard waxes, this one doesn’t require a waxing iron or any other tools to be applied. It doesn’t even require very many steps. All you have to do is pop the wax out of its container, rub it onto your snowboard by hand, and then use the attached cork to buff the wax into the base. It’s considered an all-temperature wax, able to function in air temperatures as high as 50 degrees Fahrenheit and as low as 22 below zero. As a bonus, the wax is a nice shade of green and is made with a vanilla additive that gives it a sweet, pleasant aroma.

Cons: As is the case with all rub-on waxes, this product won’t last as long as snowboard waxes that have been ironed on. You also only receive about 2.5 ounces (70 grams) of wax per container, which will keep you supplied for a few runs, but it will run out quicker than higher quantity waxes.

Bottom Line: If you don’t own a waxing iron, need to touch up your snowboard in between runs, have hot waxed your snowboard already but want a little extra speed, or simply prefer the convenience of rub-on waxing to hot waxing, this stick of rub-on wax will be right up your alley. It won’t last as long as iron-on waxes, but it’s perfect for a quick reapplication whenever and wherever you need it.

A pack of assorted snowboard waxes that will keep you supplied for longer and allow you to prep your board for different conditions.

Pros: No matter the weather or temperature outside, this value pack of snowboard waxes has you covered. You get five different waxes altogether, a warm-temperature wax, a cold-temperature wax, a standard all-around wax, and two premium, all-temperature waxes. You won’t have to go out and buy different waxes for early and late-season snowboarding since you get waxes suitable for both in this pack. And buying these five waxes together is more cost-effective than buying several different waxes separately. Each pack of wax weighs about 4.7 ounces, so you get a total of 23.5 ounces of wax with your purchase—about 1.5 pounds of total wax. And regardless of type, each wax has a very pleasant scent to boot.

Cons: The melting temperature of the waxes aren’t listed, so you may have to do some fiddling to figure out how hot to heat your iron when applying the wax. Some users also reported issues with the cold temperature wax, that it wasn’t as effective in really cold weather.

Bottom Line: If you’re not sure which type of wax you need for your snowboard, you want to make sure all your bases are covered, or you want to be prepared for any type of weather, you’ll want to grab this pack of snowboard waxes.

A reliable all-temperature wax that can be applied either hot or cold.

Pros: This all-temperature wax is suitable for a wider range of temperatures and weather conditions and gives you better, faster speed as well. You also have the choice to apply this wax hot or cold. Either heat an iron to 189 degrees Fahrenheit and spread the wax on hot or rub it on cold by hand. This allows you to either take your time and apply the wax via a traditional hot waxing method or apply it quickly in between runs if you need a fast touch-up. This wax is designed to last about three days per ounce, so you shouldn’t ever have to reapply it more than once a day. And since you receive a 12-ounce (0.75-pound) brick of wax with your purchase, it should last you about 36 days. It’s also great for skis as well as snowboards.

Cons: Though this is an all-temperature wax, you may find that it’s less effective when the temperature is freezing or below. There may also be some air bubbles in the wax itself, and more porous wax means that your block comes with a bit less wax than it’s supposed to.

We all want our sports gear and equipment to be as effective and last as long as possible, and snowboards are no exception. Even though they’re seasonal pieces of equipment, they still need some TLC to keep running as smoothly as possible. Regular waxing with specialty snowboard wax is one of the best ways to not only care for your snowboard but ensure a quicker, drag-free run ride down your favorite slope. So give it a wax, grab your goggles, strap your boots in those bindings, and enjoy a smooth ride. 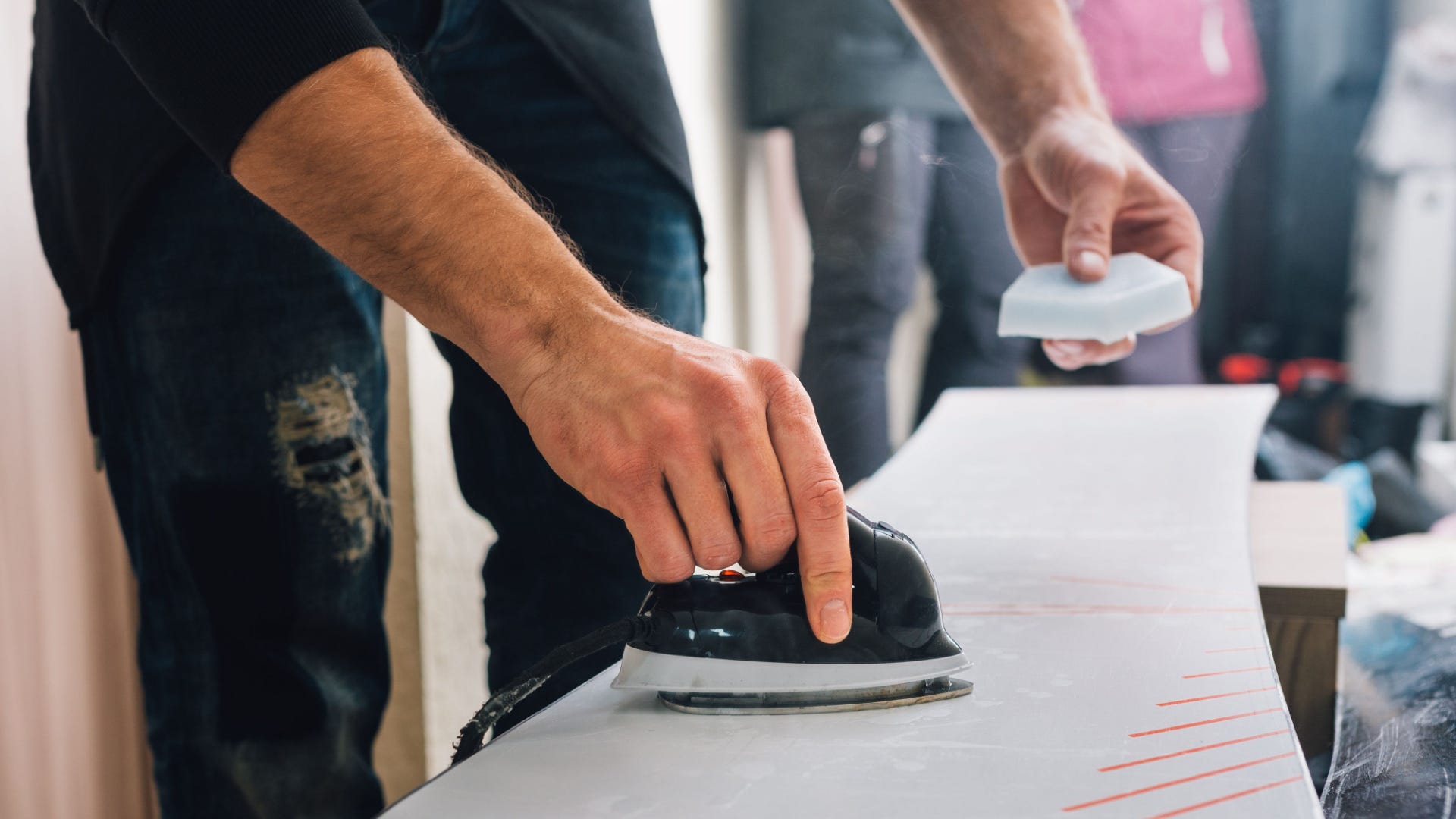